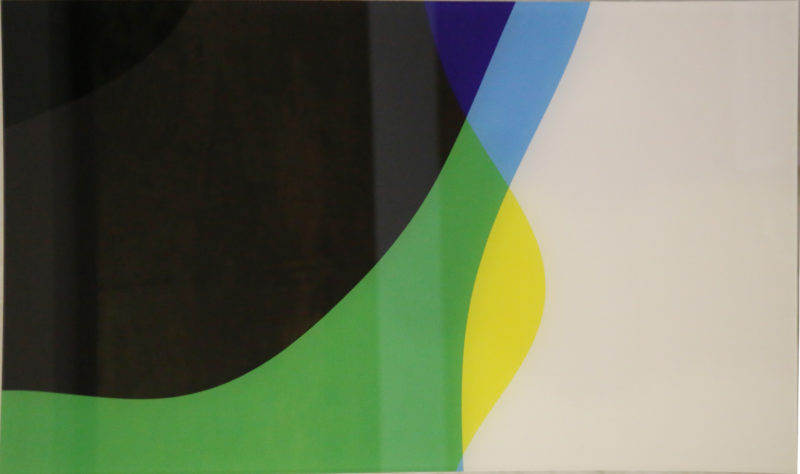 The latest conceptual works from George Papadimas are the products of his ongoing fascination with numerical sequences and the inherent relationships that occur within mathematical algorithms. Untitled Paired Digits (cmyk) (2013) is a beautifully intimate series of images that are as much a numerical exploration, as they are a reflection of the process of creation and adaptation. […] the base format of these works is the elementary representation of two paired numbers in written form. Saving and exporting this written information through multiple computer programs before finally reducing this visual outcome to its pure CMYK value, are processes that, due to the computer algorithms involved, irreversibly alter the original composition. In this way, both artist and technology become involved in shaping the final image. The resulting works of highly saturated hues swirl and intermingle in a haphazard way across the surface. Given the mathematical origins of the works, the final forms are surprising biological. These organic forms, colorful and highly luminous encourage a concentration on surface, which effectively shrouds the origin and process of the work. Once again, we as viewers are distanced from true understanding. At the heart of each work, mathematical premise reigns. The resulting aesthetics of his works however are almost the antithesis of each other; one fully embodies the harmonic relationship between line and form, and the other does its best to conceal. Whilst the methodology of the works are often difficult to comprehend, their differing forms encourage us to explore and reflect on the mysterious and perplexing relationships that exist within one or more objects. Papadimas’s engaging approach to expose and disguise a connected existence becomes an act that symbolizes evolutionary process. (Charlotte Gloerfelt-Tarp)