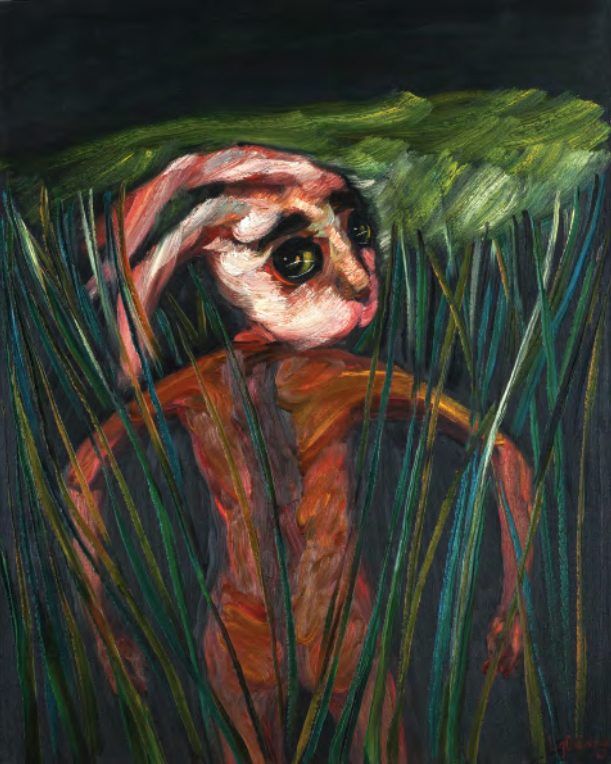 #1
Oil on canvas
150 x 120 cm
by Ly Tran Quynh Giang
The serial combinations of body parts or of human, animal, and plant organisms mutating into one another in Weary Branches finds an iteration in this most recent group of oil paintings produced in 2012-2014. Transformation verges on metamorphosis. Giang revisits early motifs with intimate but anonymous portraits of nudes and other isolated human and animal figures. Yet Where they turn to pushes zoomorphic transformation and symbolism further, echoing the philosophies of the German Expressionists, such as Wassily Kandinsky and the Blaue Reiter group. Giang, however, does not adhere to fixed systems of symbolic meaning. She allows the instinctual process of painting to signal changes in the presence and meaning of particular animals. At one point in her larger body of work the owl was predominant because of the aura of its austerity and imminent threat. In this series the owl is less prominent and the rabbit assumes more significance. Giang notes that whereas earlier works contained more of herself, intimately referencing parts of herself and her life, these paintings are less personal and more open to interpretation. Rabbits symbolize innocence, lack of protection, weakness, fragility, loneliness and helplessness, suggesting an invitation to interpretation on the part of the viewer. Perhaps, for Giang, animals provide a stronger, more open-ended means of understanding the human psyche. In her paintings, they are neither merely decorative nor symbolic. They would seem to provide a clearer window into altered states of emotions or allegories for human subjectivity. (Pamela Corey)