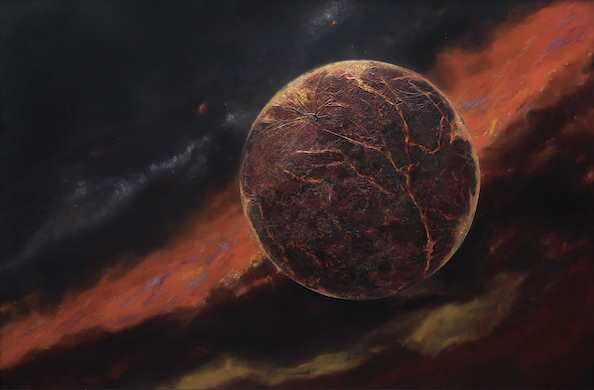 In early 2017 Truong Tan began creating hyper-realistic depictions of celestial bodies swirling in outer space. The level of detail in these paintings is unprecedented for the medium of lacquer, with Tan using a wide variety of shell fragments collected from around the world to put each and every star in the sky. The first painting in the series, Human (2017 – 2019), features a planet viewed from space, partially obscured by a swarm of belligerent figures holding knives. The figures are painted in black on black, forcing the viewer to squint and shift perspective to see them clearly, representing the teeming mass of humanity and the regrettable impacts of our actions upon each other and the planet. Inspired by this particular work, Tan set out to create 23 additional paintings of planets, symbolizing the variety of emotional states which an individual might pass through in the course of a single day, as well as the 24 frames per second which create the illusion of movement in film. All 24 lacquer paintings are installed in a single room, the works hung tightly together to achieve a panoramic effect, as if the viewers themselves were adrift in the cosmos. (Galerie Quynh)

Bing Hao reviews on Artforum March 2020: “Truong Tan has worked with lacquer for more than twenty years, but his earlier works in the medium are decidedly more visceral in their imagery, often depicting erect phalluses and his signature imagery of naked male bodies in distressing, sexual, or abject scenarios. By comparison, these lacquer-laden universes, which he began making in 2017, are starkly anodyne, even soothing. Truong Tan’s distant cosmos seems firmly detached from our earth’s petty contingencies. […]
Subject matter notwithstanding, Truong Tan’s revitalized approach to this distinctively Vietnamese art form is radical. Holding steady to certain prescriptions—the use of a wooden support, for instance, and the meticulous layering of lacquer coats (up to twenty-five per panel)—the artist brandishes his renegade flair by reinventing other aspects of the tradition. The surfaces of traditional lacquer paintings are usually not uniform. Accumulated coats of lacquer, inlays of materials such as shells, and additions of mineral powders (which add sparkle to the material’s otherwise somber hues) create a mélange of tones and textures that attest to an artist’s skill and prescience. In Truong Tan’s works, by contrast, every layer has been sanded and polished to an atypically glossy sheen in quest of a seamless, photorealistic finish. Although one could find a few passages with matte or textured surfaces—such as in Gravity, where silk threads incorporated into lacquer simulate a planet’s rocky terrain—the majority of the panels are slick, smooth, and shiny, and proudly reflected the gallery’s lighting. To achieve this effect, Truong Tan polished each panel over prolonged periods, in some cases for as long as two years. With this quiet labor, he buffed down the prickly, sensationalist disposition that had been foisted upon his persona over the years.”