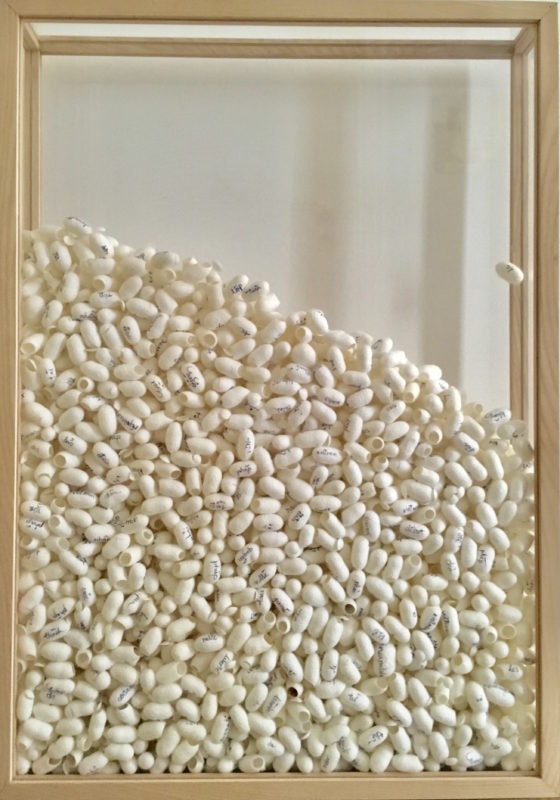 ‘A part of my life was about struggling with the awful feeling of being devalued, being looked down upon and constantly  trying to define and redefine my identity. A friend once made a bad joke saying I should see myself as an insect, a worm  with no identity, ego, so I won’t have to feel hurt that way anymore. I was shocked at first but then little by little, I found myself more and more related to a particular worm, the silkworm. It is also the animal I have the strongest phobia of.

Writing poetry brings me comfort, security, and in that very world, I can experience a metamorphosis into multiple  abstract figures. So we both silently produce our own cocoons with our saliva.

We both think we’re creating ‘silky cocoons’ of our own freewill and naturally identifying ourselves, but we are both somehow manipulated by the human political economy. One of us dies in ignorance!

Breaking down national anthems, famous songs, quotes, poetry, and political speeches into syllables with no uppercase, I intended to strip down the attributed power of those texts in order to create a kind of scrabble game in which, each syllable plays an equal power on its own. Writing each syllable on a silk cocoon gives each silkworm a name, an identity. Naming their works is just an act of recognition and compassion toward their almost invisible, non-identical but poetic life cycle a its impact on our world, at  the same time, erasing the single-sided effects of power speeches to create a theoretical equality and peace from words.’ (Cam Xanh)